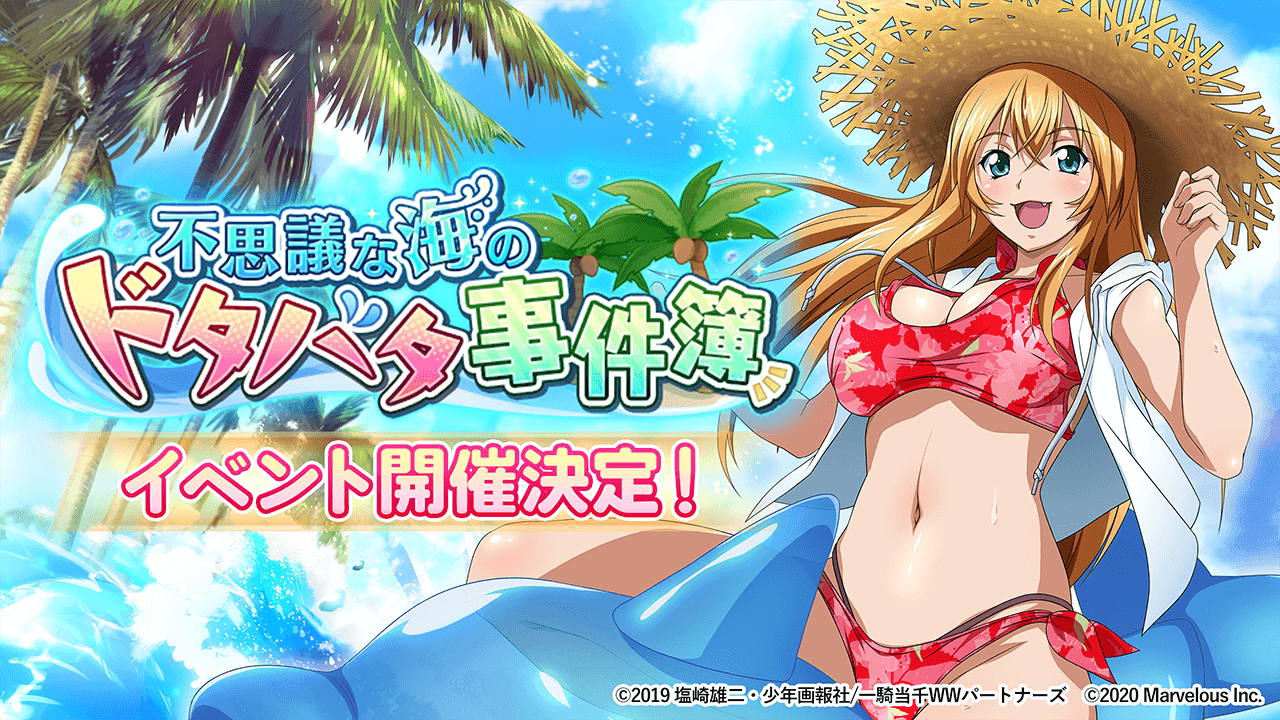 First event in the Japanese version of Ikki Tousen: Extra Burst - Swimsuit Event 'Mysterious Sea'. Because some parts of the game (Raid) still in development event look ordinary. Developers promised to fix everything and make the next event better.

Right now we just need to finish a short story and grind the same stage again and again. Just put the game on auto-repeat and do something else.

Have a question about the game? check our Ikki Tousen: Extra Burst Guide

Release of the new features and resumption of Raid 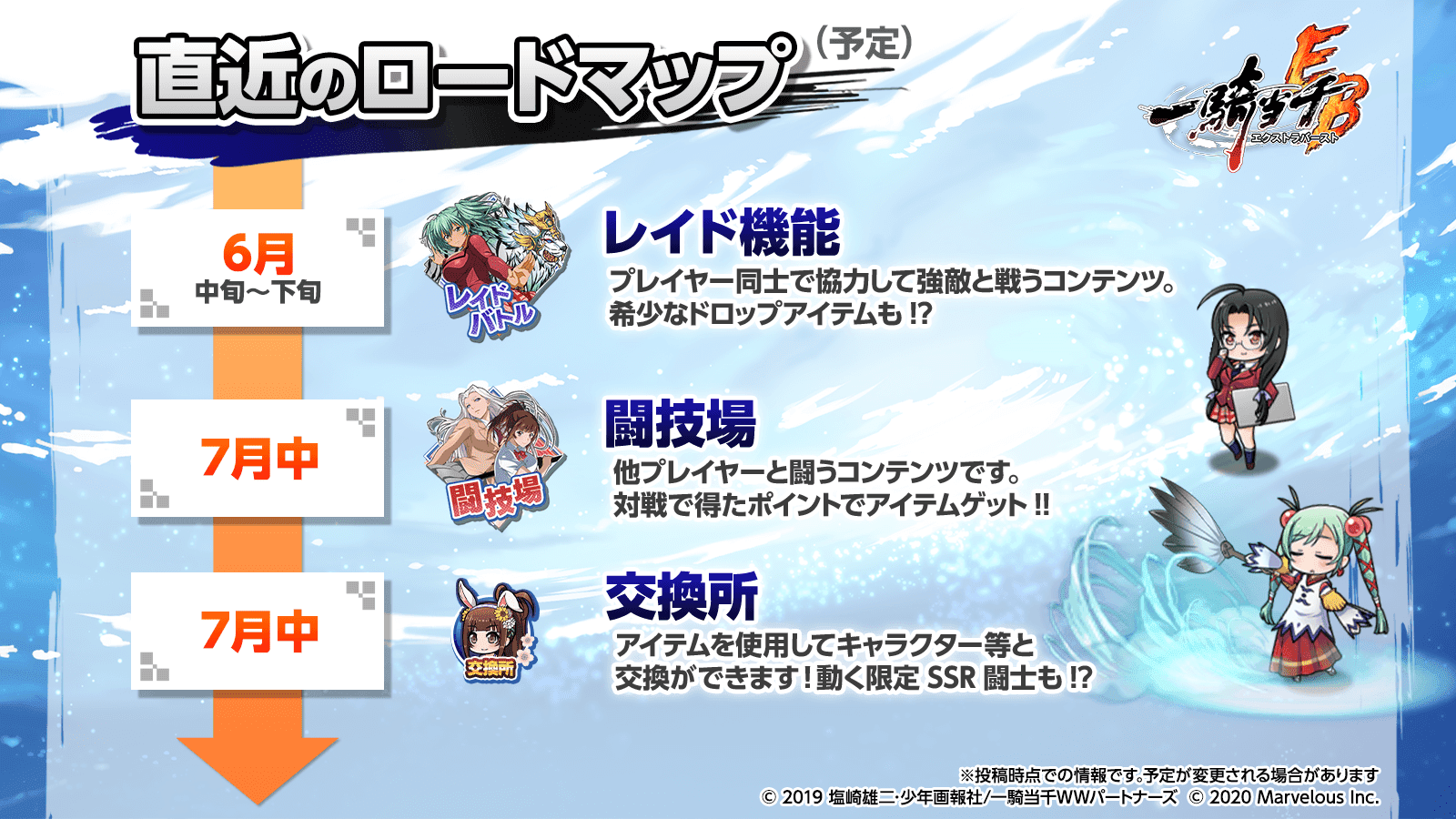 - Raid
In this mode, players cooperate with each other in order to fight against strong enemies.
Rare equipment can be acquired from the raid.


- Arena
Party vs Party for now. Rewards will be announced later.

Scheduled to be released: In July.

- Exchange place
More information will be out later. Developers mentioned that we can exchange SSR heroes.

Scheduled to be released: In July. 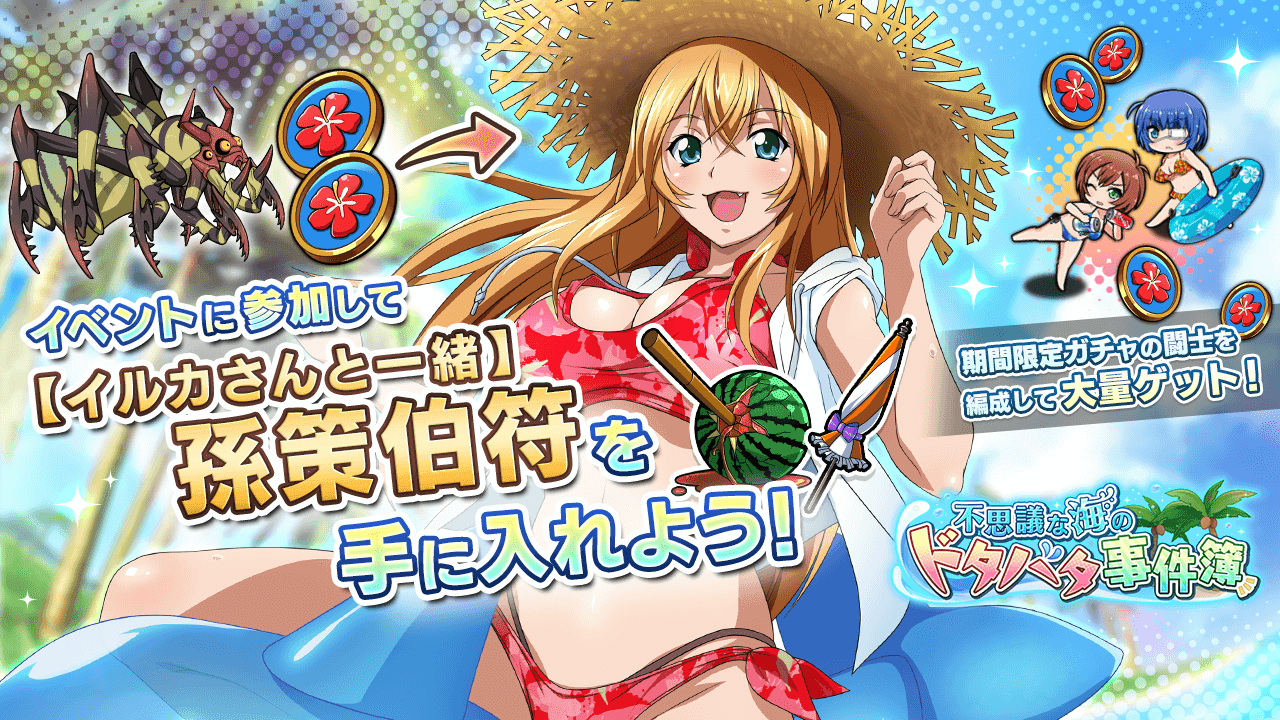 TL;DR
1. Finish all event missions and keep grinding one stage on auto-repeat.
2. Buy all items from the event shop.

We can get a good SR hero for free - SR Sonsaku Hakufu (with Dolphin). 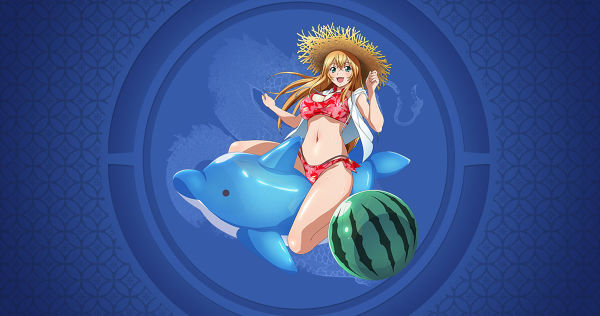 Skill 2 - Performs a water attribute attack with 113% power on one enemy twice.
[Additional Effect] Grants continuous SP recovery status to itself for 15 seconds. The amount of recovery is 2% of the user's recovery.

SR Sonsaku Hakufu (with Dolphin) does not have an Ultimate (extra burst), so we recommend to put her into a sub party rather than a main party. 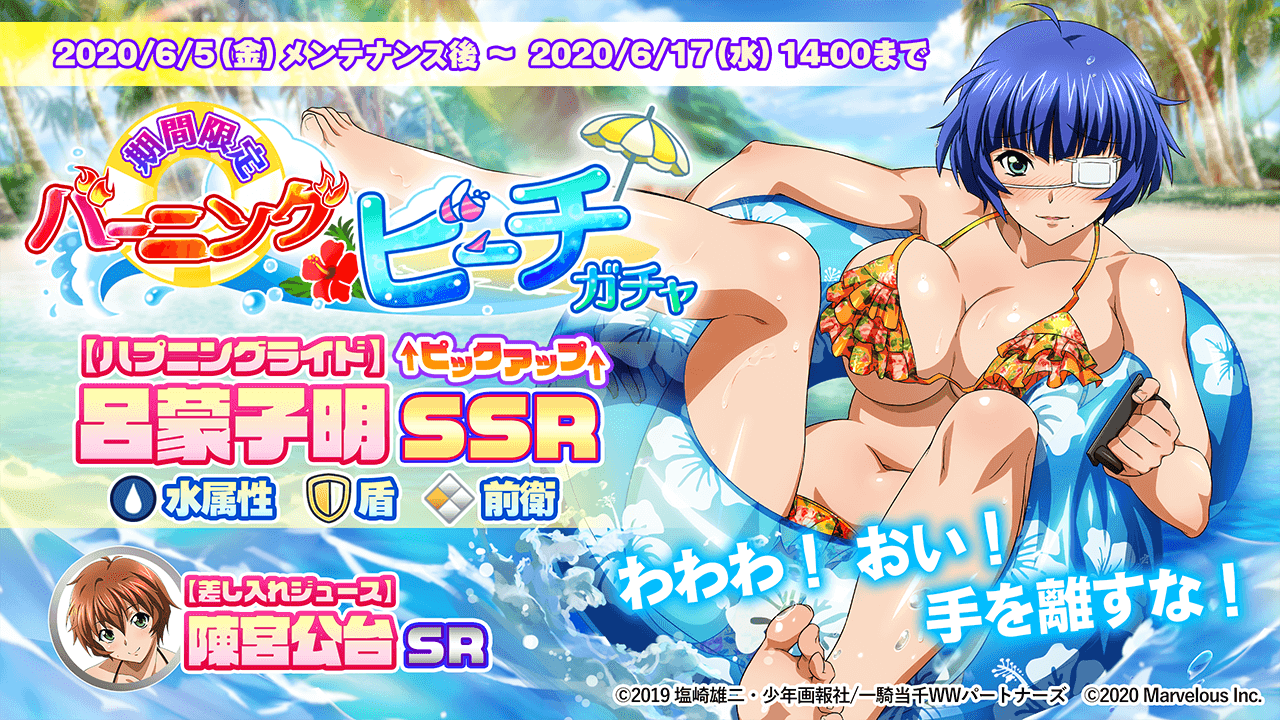 Skill 2 - Performs a 188% water attribute attack once on one enemy.
[Additional Effect] Reduces the damage done by the target by 15% for 10 seconds.

Ultimate - Performs a 1000% water attribute attack once on all enemies.
[Additional Effect] Reduces damage taken by all parties by 20% for 10 seconds. 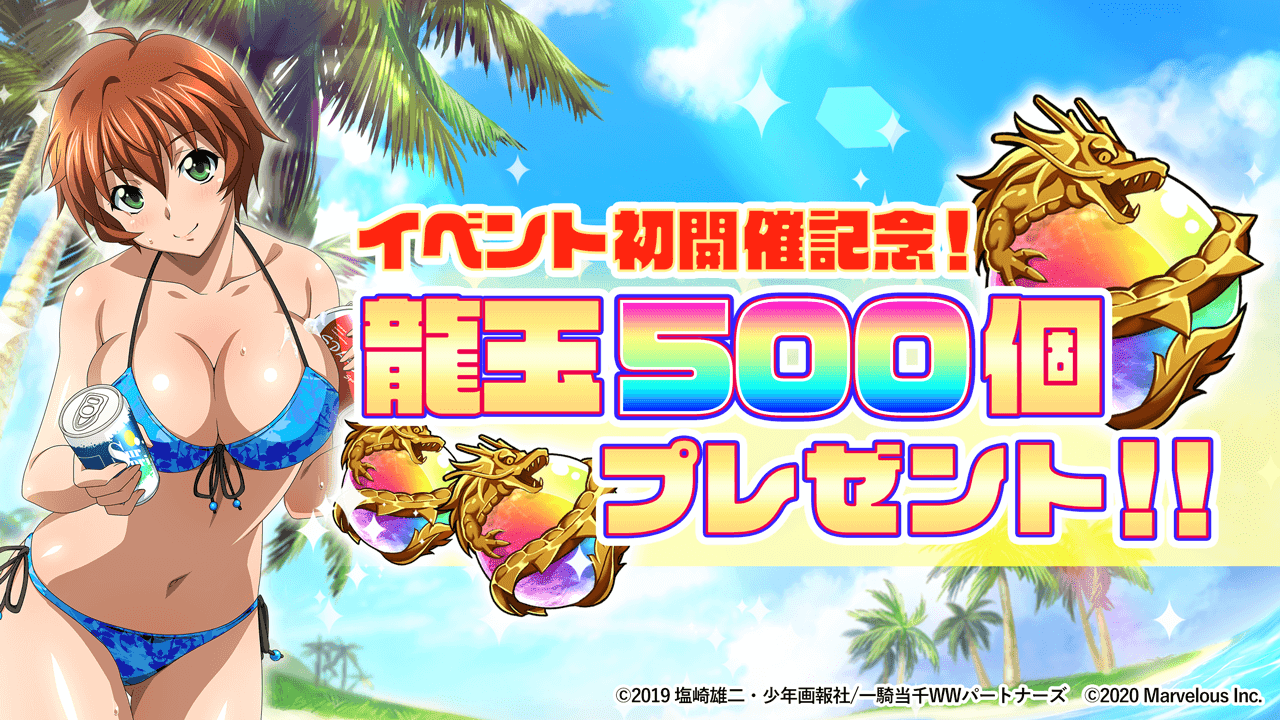 Chinkyuu Koudai (Juice? let's call her soda, lol) - SR.
Maxed skills
Skill 1 - Restores the HP of one ally. The amount of recovery is 210% of the user's recovery.

Skill 2 - Restores the SP of one ally. The amount of recovery is 30% of the user's recovery. 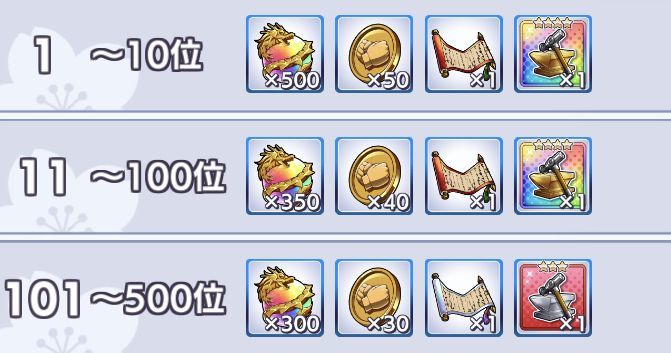 Become #1 (or at least #1000) and win gorgeous rewards. Participate in battle to get points. 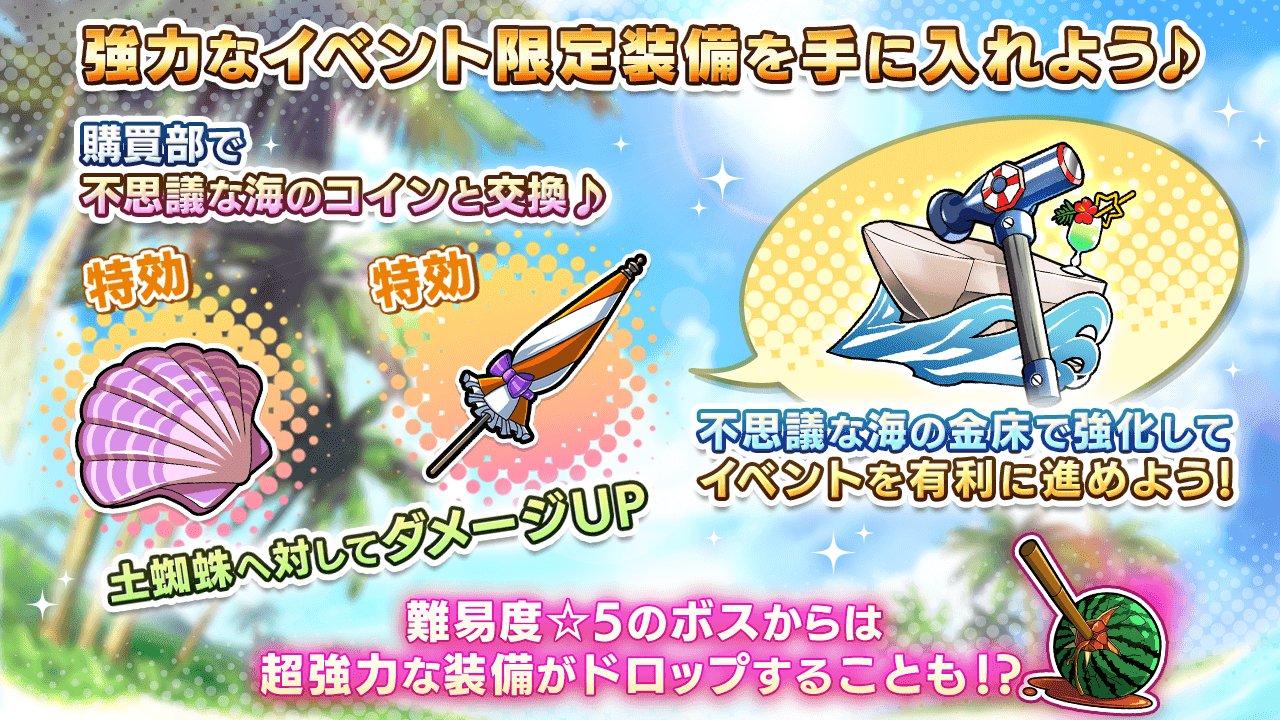 - Compete for the number of coins collected and get the ranking reward!
The total number of "Mysterious Sea Coins" earned determines the ranking for each user, and after the event is over, you can earn rewards according to the ranking!
Valuable items such as "special equipment coins", "teacher of the old teacher (SSR)" and "★4 anvil" will appear in the top rewards!
Let's collect a lot of coins and aim at the top of the ranking ♪

- Let's challenge the event mission!
You can take on special missions during the event!
Complete boss battle quests and complete missions!

- Receive a login bonus!
A special login bonus will be held along with the event!
Log in every day to get a total of 300 dragon balls and puddings, etc.
*You can receive login bonuses up to 7 times during the period. 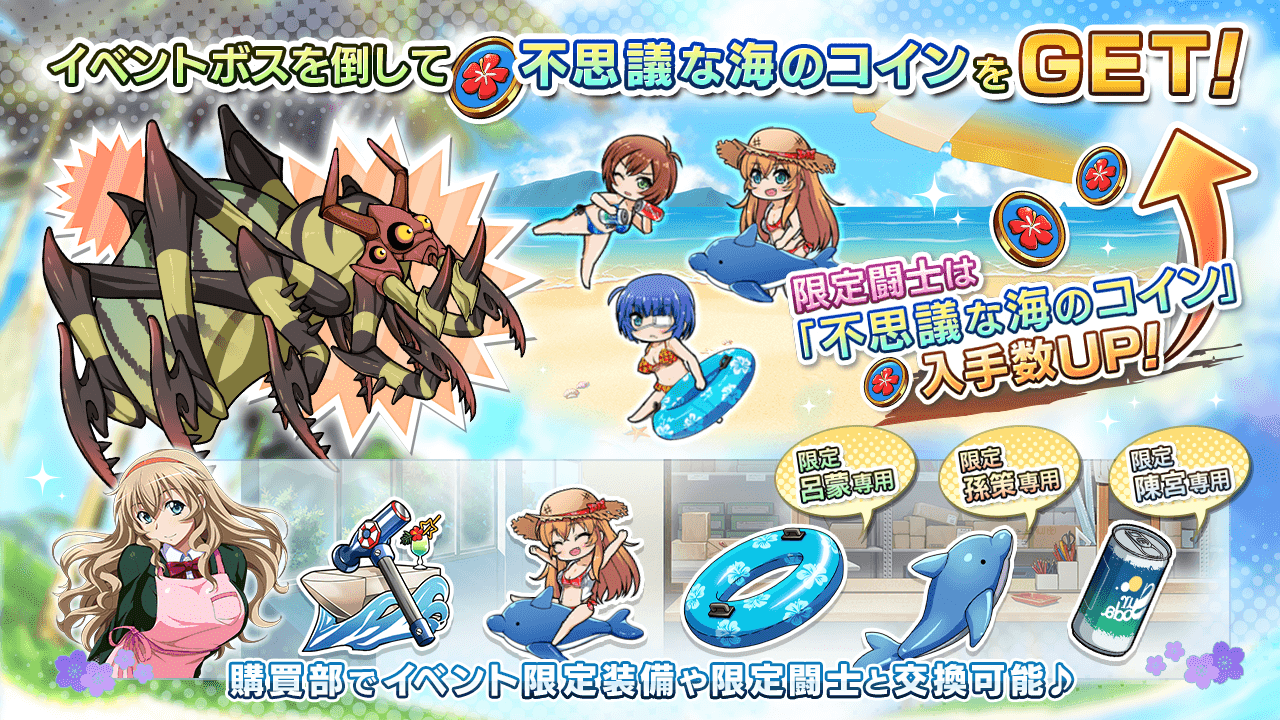 - Collect exclusive coins for the event!
You can get the event's special coins "Mysterious Sea Coin" after finishing the event battle!
Using event heroes has a special effect on increasing the number of "Mysterious Sea Coins" acquired!
- We can get coins from follow missions・Mysterious sea 1-10
・Quest battle ★1-3
・Boss battle Tsuchigumo ★1-5
・Some free quests

*Challenge after completing the event scenario quest for quest battles and boss battles can do.
*For free quests except for quests that can only be cleared once, additional event-specific enemies will appear. You can get "Mysterious Sea Coins" in the free quest where additional events-only enemies will appear.
*You can transition to the event limited quest by clicking the "Scenario Quest" button on the event TOP.
*The special effect of increasing the number of "Mysterious Sea Coins" can be demonstrated by organizing into a party.
*Collect coins and exchange them for various items!
Tags:
ShareTweet