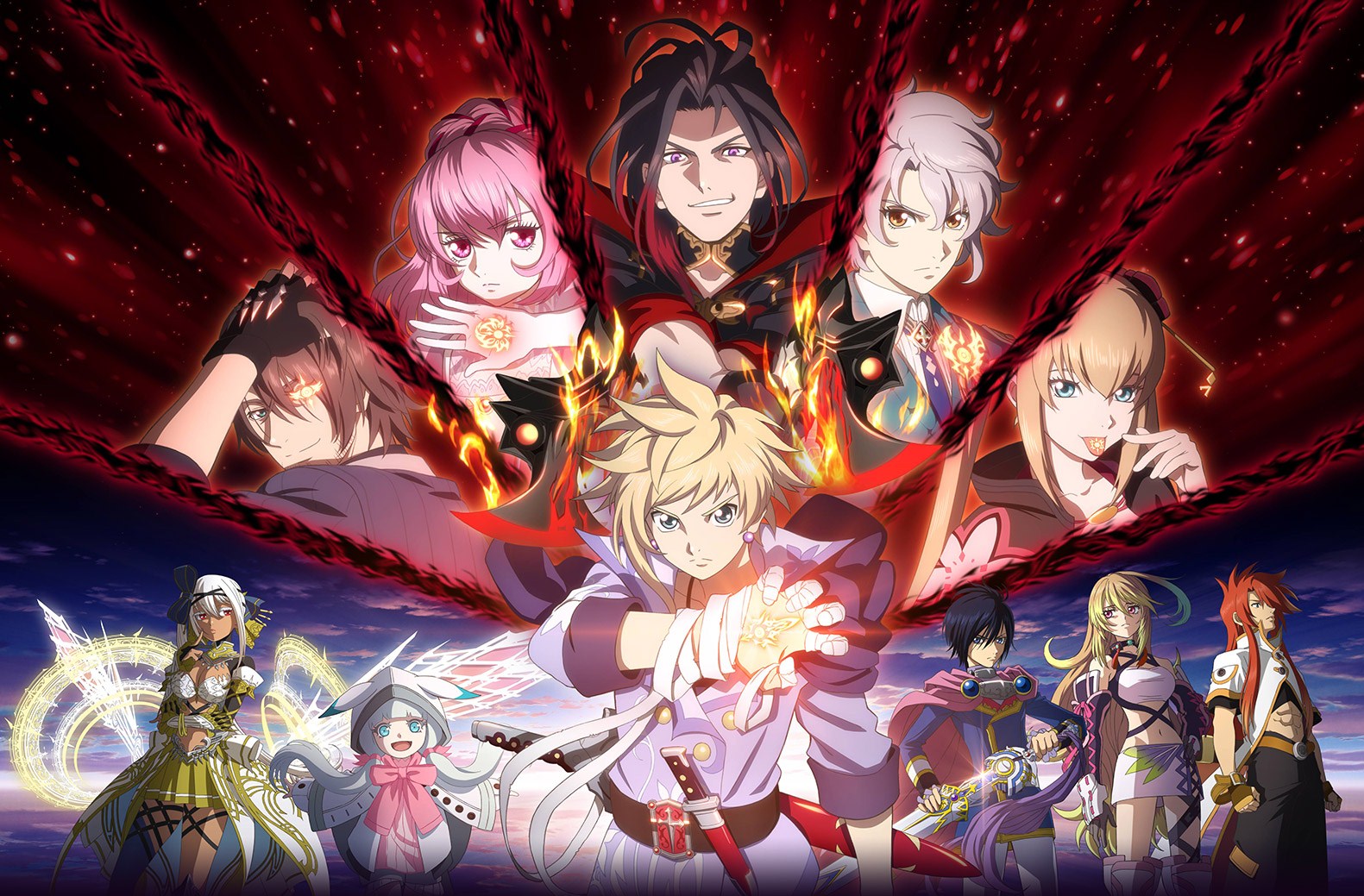 
Battle enemy pursuers and monsters in the fantasy world of Crestoria through simple yet intense turn-based anime RPG battle action! Combine Kanata and his allies with legendary characters from previous Tales series to form the ultimate team and help you in this anime role-playing quest!

It's easy, just support devs by pre-register through google store or app store.

Features
1. Customization.
2. Story and funny conversations between heroes in battles
3. Well-done characters. It's not some random 3rd rate game. 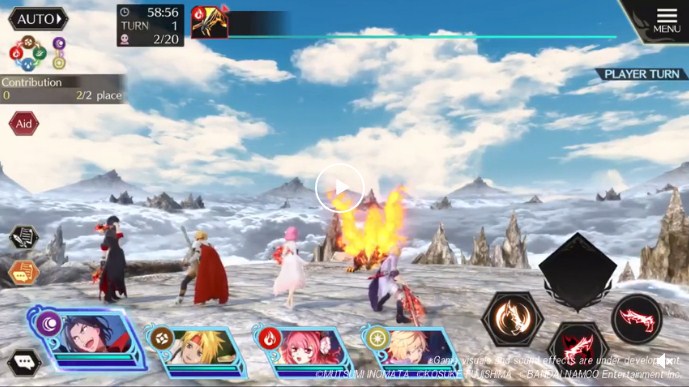 
Interview with staff who worked on Tales of Crestonia. Source.

Kosuke Fujishima
Fujishima is a manga artist and illustrator best known for "Oh! My Goddess" and "Toppu GP." He has also created character designs for the Tales series starting from the first title, "Tales of Phantasia," and including titles such as "Tales of Symphonia" and "Tales of the Abyss." This title features his work in the protagonist Kanata's character design.

Q. As the person in charge of Kanata's design, were there any elements you were careful about when drawing him?
A. I went back and forth quite a bit with his clothes and personal belongings, considering the character's background. I tried to make sure that the patterns on his outfit weren't too complicated.
Q. You've done character design work for several of the Tales series games so far, but was there anything new you tried with this title?
A. Rather than trying to emphasize the fantasy element with the character's hairstyle, I designed with a more contemporary taste in mind. The cape was also made with current sewing machines in mind, so it should be possible to replicate.
Q. Do you have anything to say to everyone awaiting the game's release?
A. I designed Kanata to look good in motion, so I'm excited to see him animated too. I've also heard that there's multiplayer battles, so I might be able to fight alongside all of you.

Q. As the person in charge of Misella's design, were there any elements you were careful about when drawing her?
A. While she is the heroine, she's also had a difficult upbringing as an orphan, so I chose to give her a more restrained look. Still, I think she conveys the strength of her feelings for Kanata, her firm will, her sadness, and her fickle nature.
Q. You've done character design work for several of the Tales series games so far, but was there anything new you tried with this title?
A. My intentions didn't differ from other Tales titles, but I did think about how this game is a mobile title. So, while I was drawing her, I thought it would be nice if the fans grew to love her and know she's always close to them.
Q. Do you have anything to say to everyone awaiting the game's release?
A. Although I get eyestrain from playing games on my phone, I want to play this game. I hope everyone tries it and plays it together.

Q. As the person in charge of Vicious and Aegis Alver's designs, are there any specific details you'd like to highlight?
A. ▼Vicious
He's meant to be a fierce character with masculine sensuality, so I made sure to bring that out. His coat, which would normally cover him up, is instead open to expose the lines of his body and emphasize his sex appeal.
▼Aegis Alver
He's a young, earnest knight, so my concept for Aegis was a straightforward, princely design. With his suit-esque clothes and thick eyebrows, he looks gallant without being too cute.
Q. Was there anything you were particularly conscious of while designing for TALES OF CRESTORIA, a Tales series title?
A. I struggled with what exactly defines a Tales series character as I was drawing them. I also hoped that when they're lined up with other characters from the series, the fans will be able to recognize them as Crestoria characters!
Q. Do you have anything to say to everyone awaiting the game's release?
A. Look forward to the adventures the Crestoria characters, as well as the Tales series characters in the world of Crestoria!

Okumura is a member of BANDAI NAMCO Studios, an art director, and a graphic designer. He has provided art direction and character designs for several Tales series titles since "Tales of Eternia," the third title in the series.
＜Self-Introduction＞
I've been involved in the art and design of the Tales series for a long time. Some of my most prominent designs are Ludger, Emil, Marta, and Alisha. I may look like just a character artist, but I've done everything from monsters and gadgets to building designs and nature. Recently, I've been doing the art direction for an online RPG called "Blue Protocol."

Q. As the person in charge of Yuna Azetta, Orwin Granberg, and Machina's designs, are there any specific details you'd like to highlight?
A. ▼Yuna Azetta
When you create a design with complicated patterns or lots of lines, you tend to get sour looks and complaints during the anime production meetings. Because of that, there was a time where I avoided those complicated designs. But this time it turns out that they'll take care of it for us, so I didn't hold back with Yuna's design. You can look forward to lots of flowery patterns with her.
▼Orwin Granberg
When I first turned in the rough design for Orwin, I was told "there's no way Orwin would wear such tacky shoes." So now he has a more refined design. Please note all of the details from the top of his head to the tips of his toes.
▼Machina
I'm fond of the little ears on Machina's hood. Having the ears stand up is also nice, but I liked having them follow the lines of the fabric and provide a small accent, so that's how I arrived at this design.
Q. Was there anything you were particularly conscious of while designing for TALES OF CRESTORIA, a Tales series title?
A. Although Crestoria may be a mobile title, the range of expression is basically the same as what we had for Xillia, so I designed as I would for a console title. That said, because there are limitations imposed by the screen size, I made it so that defining characteristics would still come through, even on a small display. The key is to be able to differentiate the designs even if they're shrunk down to sixteen square pixels. On a modern smartphone, that would be even smaller than the size of a punctuation mark.
Q. Do you have anything to say to everyone awaiting the game's release?
A. My main work right now is the art direction for Blue Protocol, so I haven't worked on any Tales games since Tales of the Rays. But my love for the series hasn't faded one bit. If anything, it's stronger than ever. After all this time, I really enjoyed shaping a character for the series and put my whole heart into these character designs so that everyone will enjoy them. I appreciate the fans' sincere support of the Tales series now and moving forward.

A member of BANDAI NAMCO Studios, Itakura has served as the art director for the "GOD EATER" series and "CODE VEIN." He was in charge of numerous character designs for "GOD EATER" and has previously worked on game graphics, costume design, and enemy design for the Tales series. This title is the first time he has designed a Tales series main character.

Q. As the person in charge of Kasque's design, are there any specific details you'd like to highlight?
A. Kasque has a unique role within this title, so she needed to have an unusual, almost divine quality to her. That made her a difficult character to design. At first glance, she seems like she might even be from a different world than the rest of the cast. I hope everyone is looking forward to seeing how a character like that will interact with our protagonists.
Q. Was there anything you were particularly conscious of while designing for TALES OF CRESTORIA, a Tales series title?
A. It's a privilege to be a part of a series with such supportive fans, as well as a development team that truly wants to expand the reach of this game to an even broader audience.
Overall, I feel that the characters in the Tales series are crafted to highlight their individuality. Actually, when I was designing Ix and Mileena's Part 3 costumes and Mirrite outfits for "Tales of the Rays," I paid special attention to the characters' personalities and how they were involved in the story. I also paid the same kind of attention when designing Kasque.
Q. Do you have anything to say to everyone awaiting the game's release?
A. To everyone who has spent time with the series thus far, as well as everyone interested in picking up their first Tales title, I hope you're looking forward to it.