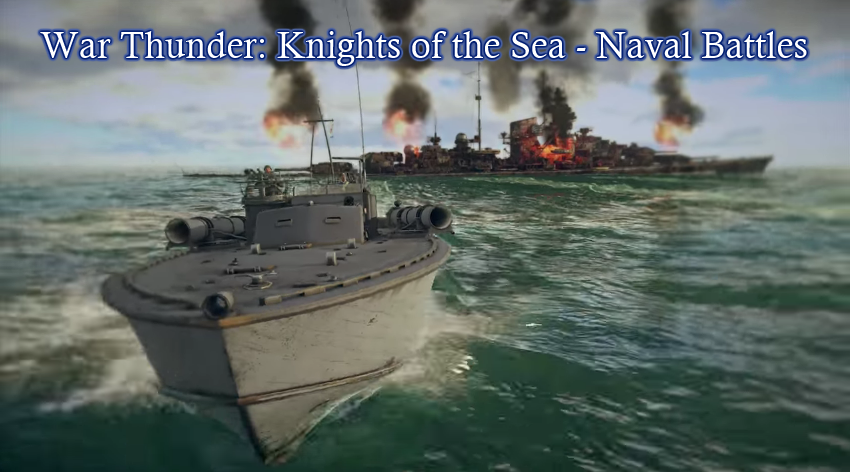 At first glance, you can think that Naval Battles will be similar to World of Warships with big and slow battleships but Gaijin Entertainment decide to use - "fast attack-based craft" which are rarely reproduced in games.

Naval Battles Teaser
More information will be revealed at this year's Gamescom which takes place this year from August 17th to August 21st.
Starter Packs

"Those who purchase one of two Starter packs with unique ships, will be able to join the closed beta  testing as soon as the testing phase begins later this year. The first Starter Pack includes the Soviet Project 1124 Armored River Boat with the unguided rocket launcher, the legendary Katyusha. The second starter pack includes the famous American PT-109, a motor torpedo boat on which the future US President John F. Kennedy commanded and performed acts of wartime heroism. Both ships will be available at the start of the closed beta testing as will other nations vessels."
I assume first CBT start from August 17th to August 21st.


FAQ :
Question:  When is the closed test due to begin?
Answer: Closed testing of naval battles will begin this year. Question: How can you get into the closed beta?
Answer: Closed Beta Testing will involve invited guests, as well as the owners of the two starter sets with unique boats, which are already available for pre-order in the Gaijin.Store. To learn how to get into the closed test team, we will update later. Question: When will the open test start?
Answer: ​Open testing is planned for 2017. Question: What types of boats will be added and for which nations?
Answer:​ During the closed test, we will gradually fill the naval line which will take us to the start of the open test where we anticipate having enough boats of all 5 ranks for every major nation. We also plan to add new naval modes and locations for the closed test. Question: Will larger ships (cruisers, battleships, aircraft carriers) be available for player control? If not - why do we need torpedos?
Answer:​ Larger vessels, while not available for control by players, but will be presented under the control of AI in some game modes. One of the main tasks of combat torpedo boats will be the destruction of larger ships. Player-controlled destroyers and other large ships may appear later, in other gamemodes, it will be decided based on results of closed beta. Question: How will the vessels be researched?
Answer:​ Just as with aircraft and ground vehicles. In battles you may earn research points which will open new ships in the selected branch of the nation, as well as modules on the vehicles which were used in combat. Question: The ships will be managed by the same crews, who now have the players? In other words, for existing crews will add a third specialization ship?
Answer: ​Yes, but only after the onset of the research branches. Question: Will there be special locations for the vehicles?
Answer:​ Of course, sea battles will involve some new locations. In War Thunder, major maritime theatres of WWII will be represented: Pacific, Atlantic and Arctic oceans, as well as the Mediterranean. All the new maps will feature the new 3d water effects created using NVIDIA Waveworks technology. Question: When will the CBT nation lineups be published?
Answer: ​After Gamescom. But on Gamescom you will be able to check ships from each nation.
Tags:
ShareTweet