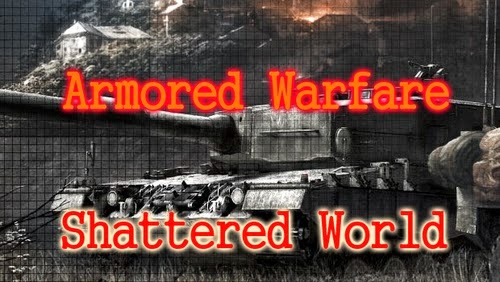 Armored Warfare is a new game about modern tanks, armored vehicles, and more. Developed by Obsidian Entertainment and my.com. My.com belong to mail.ru, one of best MMO publisher in Russia. Yes they have big fail in allods online but it been ages ago and they even make p2p server, ArcheAge and Dragon Nest been fine so we can trust them.

They're going be 2 servers from start International and Russian, subscribe to both, and have x2 chance to win invite in closed beta.

We can see tanks, helicopters, and even aircraft in it. Too bad helicopters and aircrafts probably going be NPC only.

Also we can see that environments can be destroyed, game work on CryEngine 3 so we see fine graphics.

Some information from Russian websites, it not final  information and many can be changed:

2. Technique is presented in the game from the 50s of the last century to the early 21st century.  Already have T-80, Leopard 2A5, Challenger 2

3. The range of combat vehicles is very diverse: there are tanks, light armored jeeps, and tank destroyers from many countries- Russia, USA, UK, Germany, and others.