On June 9th, 2019, we were able to host the “Epic Festa” in Seoul, South Korea. This is the first Epic Seven festival that has ever been held. We would like to sincerely thank all of our Heirs who came out this weekend and showed their support for Epic Seven. We, the developers, were delighted and excited to have the chance to meet our Heirs in person.

We are grateful for the invaluable opinions and suggestions that our Heirs gave us during this event, and we will do our best to reach even more players in Epic Seven and have an even bigger and better festival next year.
During the Epic Festa, our development team gave a presentation about the June update, which includes information about Episode 2’s story outline and art concept. These Developer Notes will give details about this presentation.

As there was a lot of content given during the presentation, we have prepared two developer’s notes to fully convey the details of the presentation. This first developer note will mainly talk about the June update.

Please note that some images and terms may change at the time of the actual update.

June 13, Episode 2 Update – Godkiller
Destina’s side story, a Concerto of Light, Fire, and Ice, which was released on May 23rd, 2019 and the current side story, The Chosen Shaman, featuring Luluca are both prologues to Episode 2.
Following their own motivations, Destina and Ras, who could sense danger coming to Orbis, and the Shaman Luluca, who lost her homeland to Straze, set out to Cidonia, a large continent to the south. 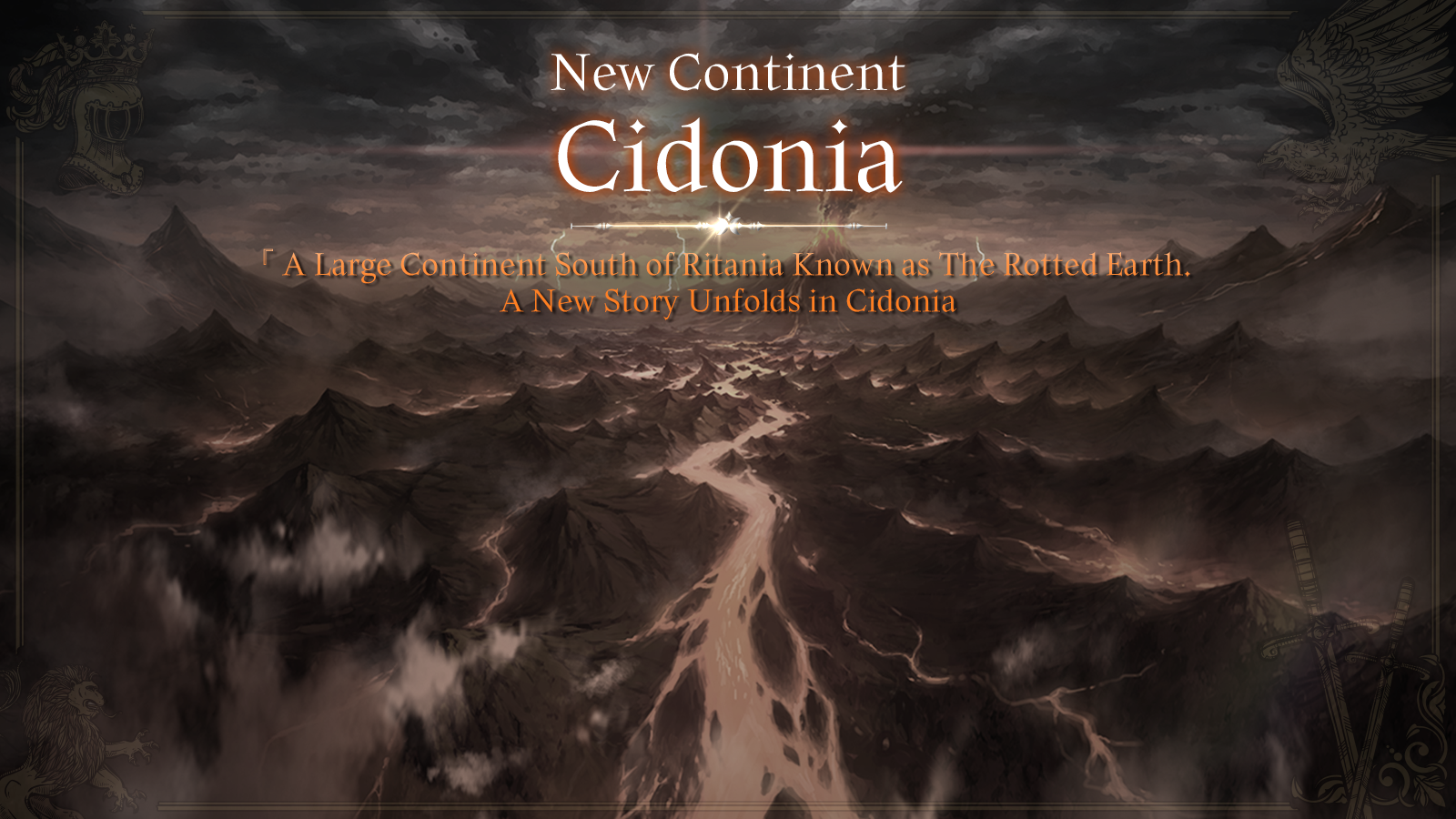 New Continent – Cidonia
In Episode 1, in Ritania, Cidonia was known as the Rotted Earth. Because most of the Cidonia continent is barren and rocky, it does not have large countries such as Ezera or Taranor. Instead, it is mostly made up of smaller city-states. After gaining the trust of the city-states, Heirs will join forces to stop the crisis at hand.
Just as in Episode 1, Episode 2 consists of 10 chapters with each chapter having 10 stages. In total, there are 100 quests. Of course, there are optional chapters and stages too.

On June 13th, chapter 1, Jerdun Borderlands, and chapter 2, Crimson City Meldrec, will be released. Following this, we will release a new chapter every month. 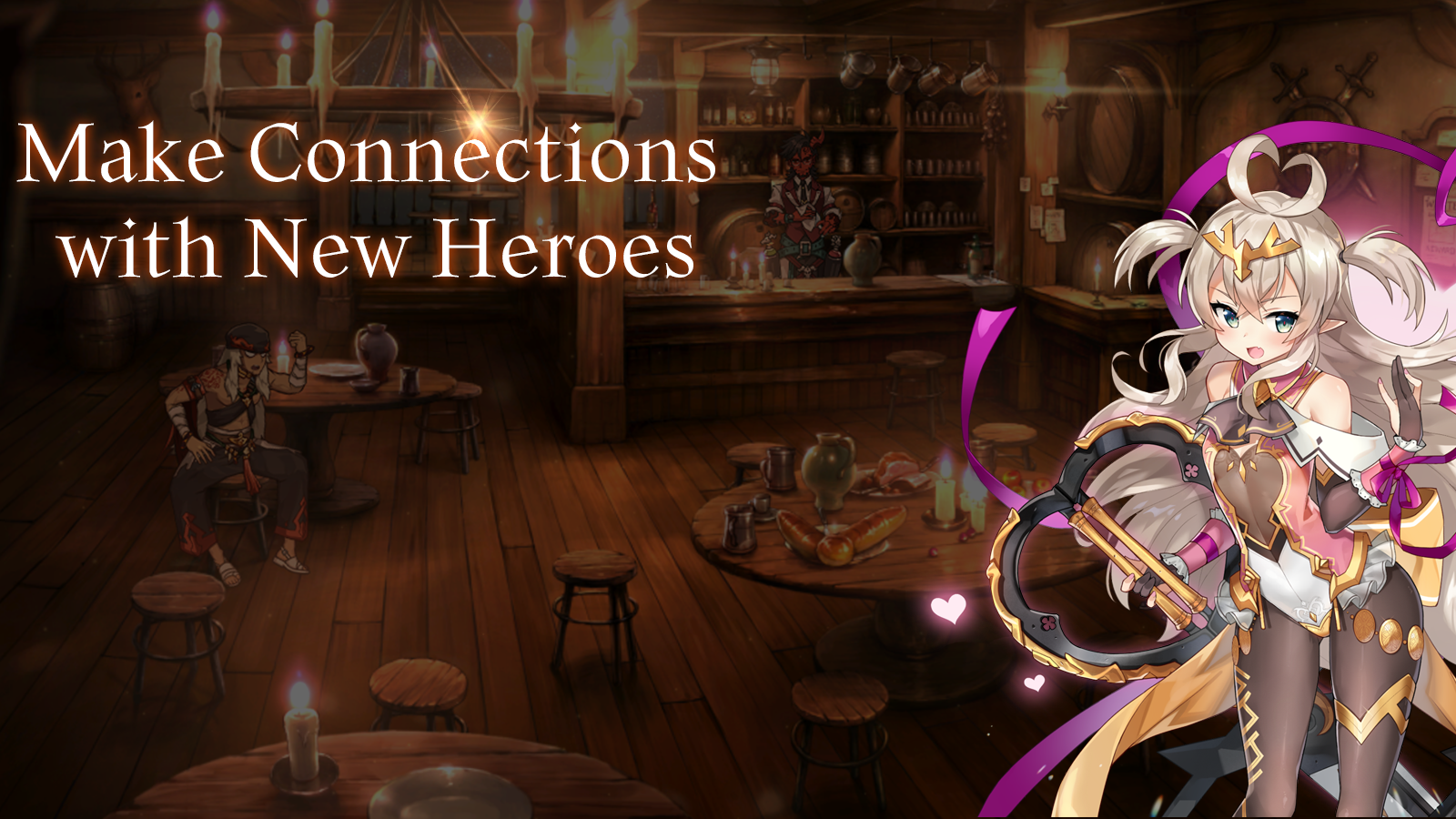 There are more than 15 new 3★ and 4★ Heroes waiting for you in chapter 1. As you progress though the quests, players will be able to make new connections with some of the new heroes.

In Cidonia, there are also monsters such as scorpions and griffons, which are native to the barren land of Cidonia.
There are also new enemies that have adapted to civilization in these city-states and other, strange unknowns.

Epic Seven’s story creator, art director and background director had time to talk about Cidonia’s story, the background of the city states, the heroes that will appear and the concept art for the monsters. These developers’ notes will not go into further details of their discussion. However, Heirs will be able to see what was discussed in the next developer’s notes. 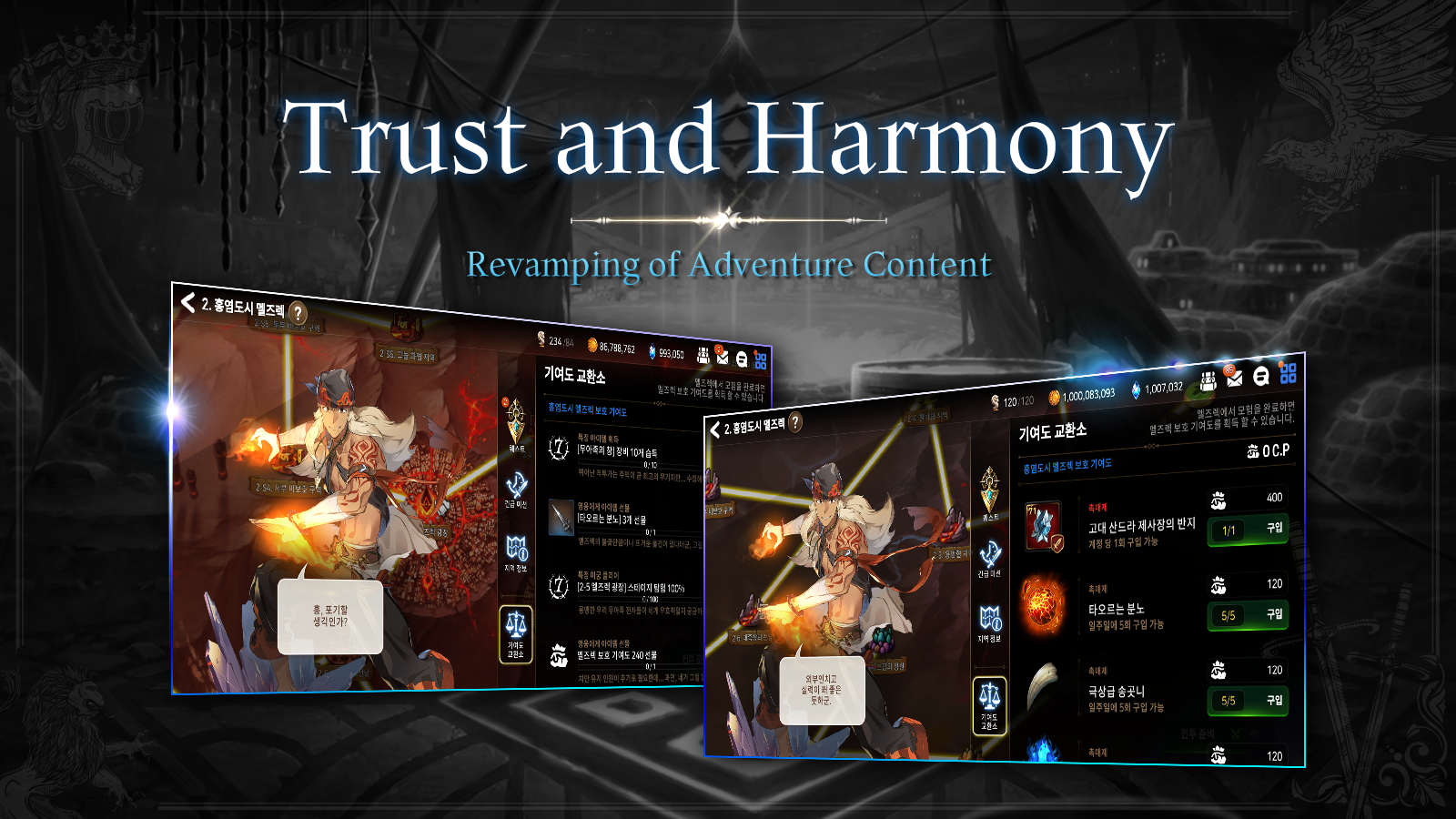 “Heir of the Covenant” is the key phrase for Episode 1.
In Episode 1, the main characters had their own missions and they got tangled up with the issues that arose from those missions. Ras sought to destroy the Archdemon and to do so he went to search for sanctums scattered across the continent of Ritania. However, we feel that at times, we were not able to convey this message as clearly as we wished.

Epic Seven’s phrase is Play the Animation. With this phrase, we wanted our heirs know that the goal of Epic Seven is for them to enjoy the animation.  Therefore, we decided to focus on the adventure so that they can enjoy the story without any interruption.

Trust and harmony are the main key words for Episode 2: Godkiller.
In this barren land there is no such thing as trust as each city-state is at odds with each other. Due to this situation, there is no need to even talk about the outsider, Ras and his party. Episode 2 focuses on winning the trust of these city-states through various adventure content.
Even if you clear all the quests in each of the city-states, you still have to win the trust of the heads of the city-states. These heads of the city-states may either test you or demand something of you. If you can build trust, you will gain treasures and the Breath of Orbis. And, this trust will greatly help Heirs in the future, when they face a huge threat.

The following content will provide heirs with an even better opportunity to become stronger; an even deeper abyss, the Automaton Tower, improved challenges and much more. 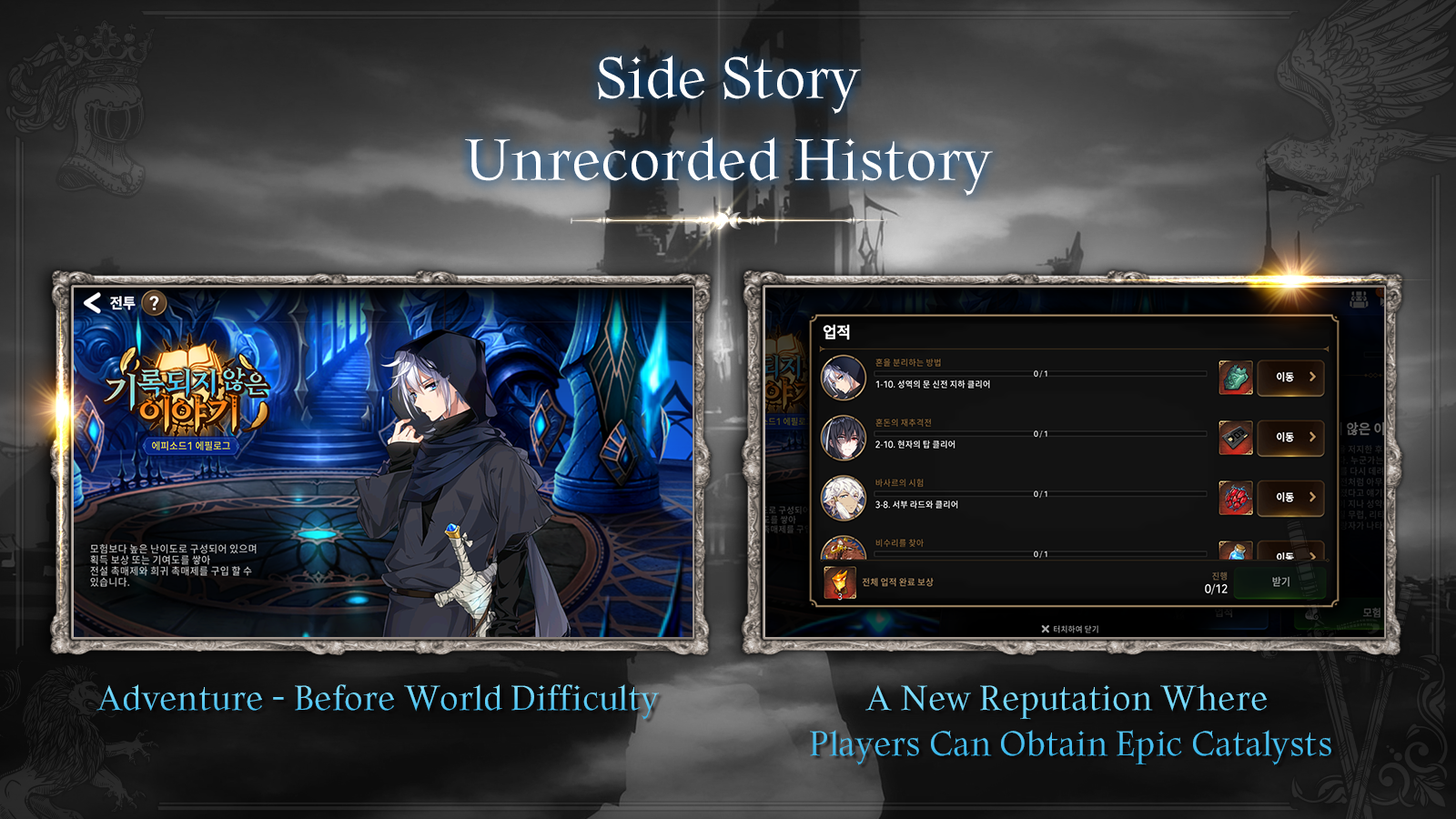 With this update players will be able to experience world difficulty of adventure mode in the new side story, Unrecorded History. Following the AP exchange update, players have been repeatedly playing through World difficulty in order to obtain catalysts. We felt that having a map that needs to be repeated several times did not follow the idea of adventure mode. Additionally, we felt that it would be frustrating for players to play through Episode 2 and then have to return to Episode 1 to select world difficulty again in order to receive certain catalysts.

Episode 1’s epilogue will be accessible at any time and players can play through it to obtain catalysts. The world difficulty for adventure has been moved to the side story area. It will consist of the same stage clear missions and region rewards as in the current world difficulty setting.

In order to encourage players to experience the new side story, Unrecorded History, we have added new reputations which will allow players to obtain catalysts. After completing the last stage of each chapter, players will be rewarded with an Epic Catalyst. 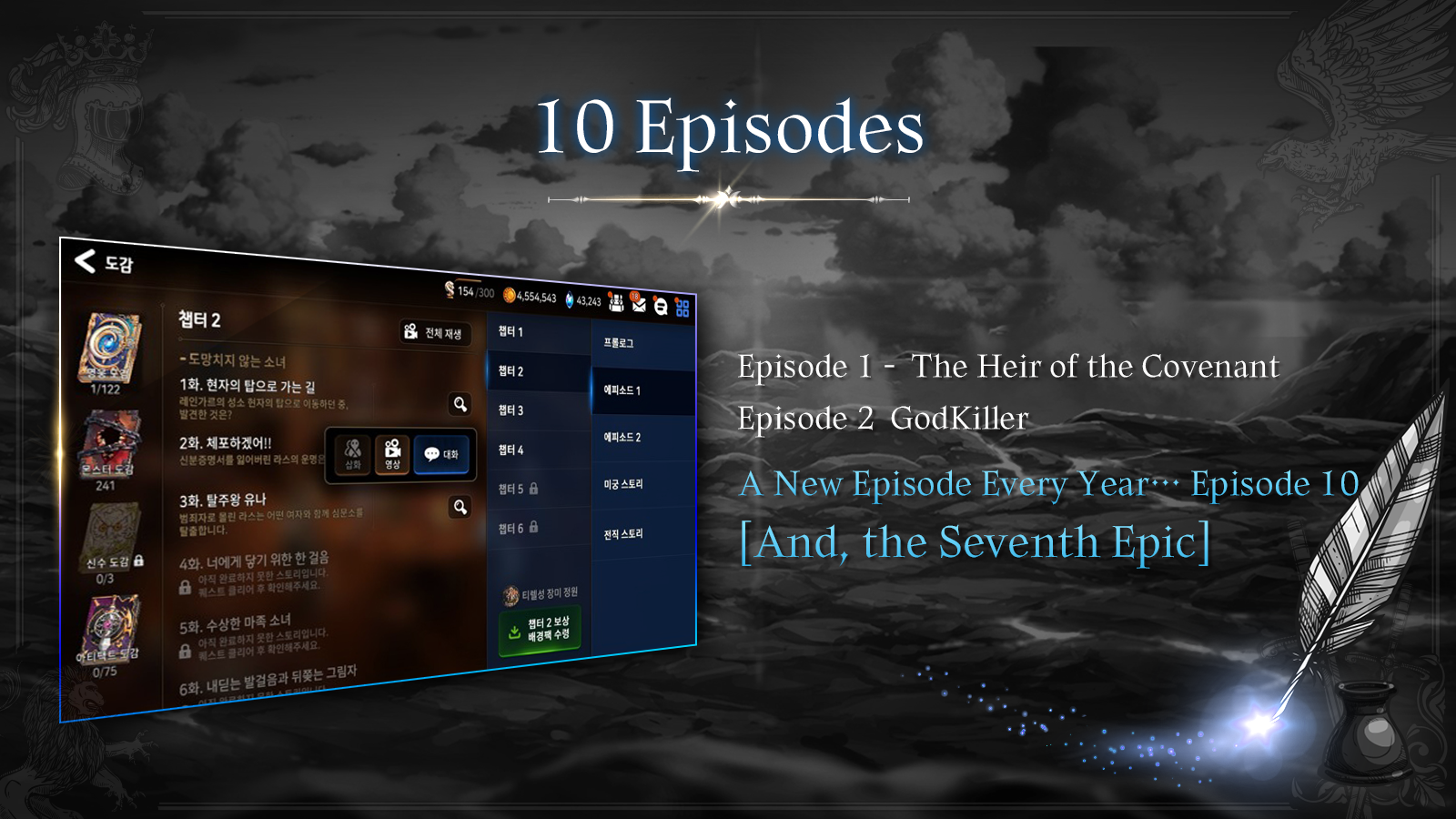 Ten Episodes and a Story Journal
We are concerned that it may be difficult for our Heirs to adapt to these sudden changes that have been made to adventure content, specifically the transfer of the world difficulty. However, it was necessary to do this in order to prepare for the many episodes that are to come.

Epic Seven’s main story consists of 10 episodes in total. Episode 1 was The Heir of the Covenant, and Episode 2, which will be released soon, is Godkiller. Sometime next year, we will be releasing Episode 3, which will feature the continent of Eureka, consisting of countries that our Heirs are already familiar with such as Wintenberg, Lefundos, Politia and others.

We plan to release one episode per year including the Seventh Epic which will be released as the tenth Episode. We hope that our Heirs will continue with us on this journey!
The world of Epic Seven will be gradually revealed as new episodes are released. The developer’s team really wishes to provide our Heirs all over the world with the Epic Seven IP, art books and other related goods. We will continue to work hard to share Epic Seven to Heirs all over the world. 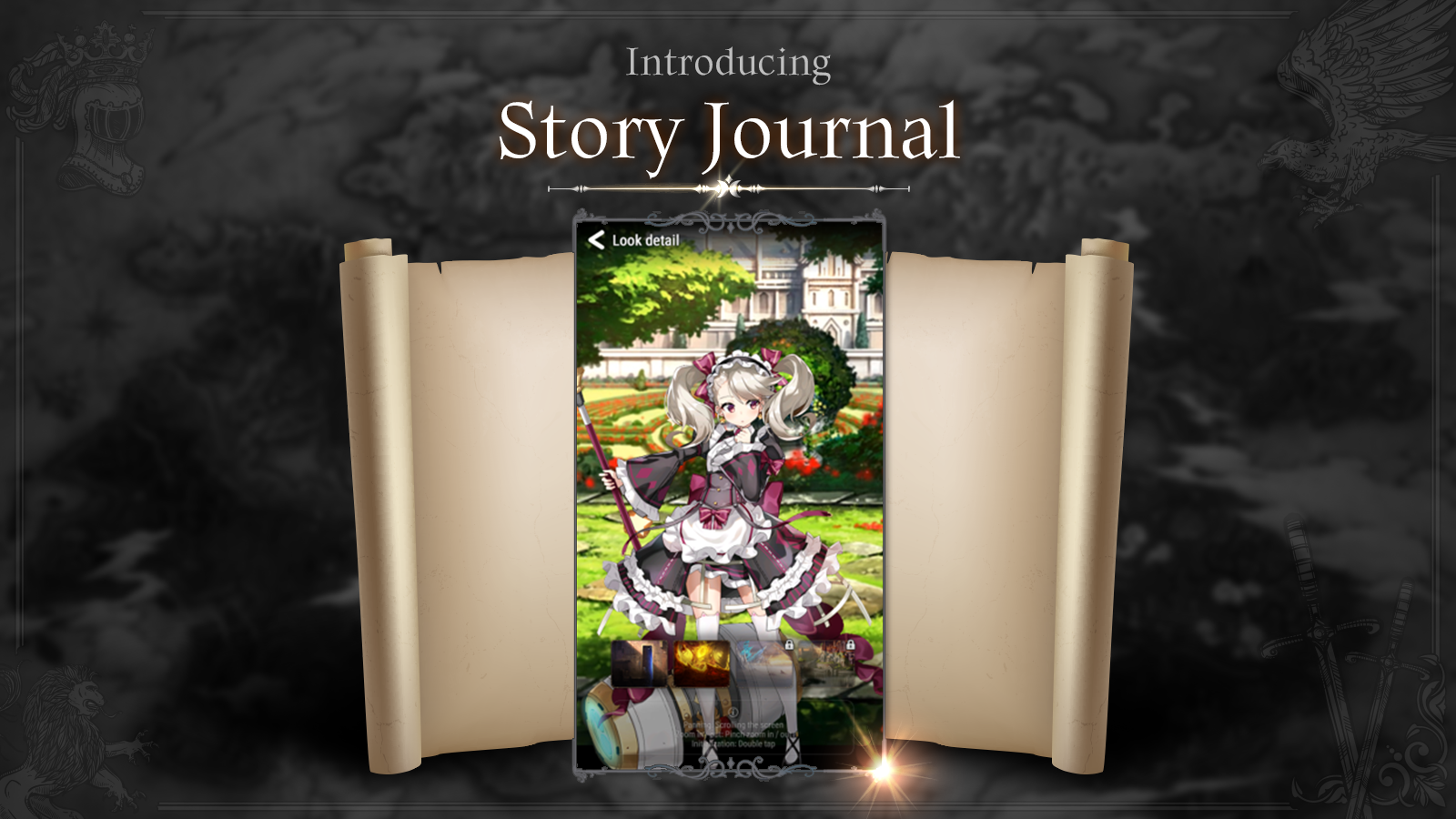 The main story told in Epic Seven is detailed and intertwined with other stories. We know that it may be hard for our Heirs to remember everything. This is why we will be releasing a Story Journal. We plan to release it around the end of June at the earliest or during July at the latest. Players who have completed every story, will be able to go through the main background story of each chapter again. Additionally, after completing the certain story points, players will be able to choose select backgrounds to enjoy from the Hero details screen. 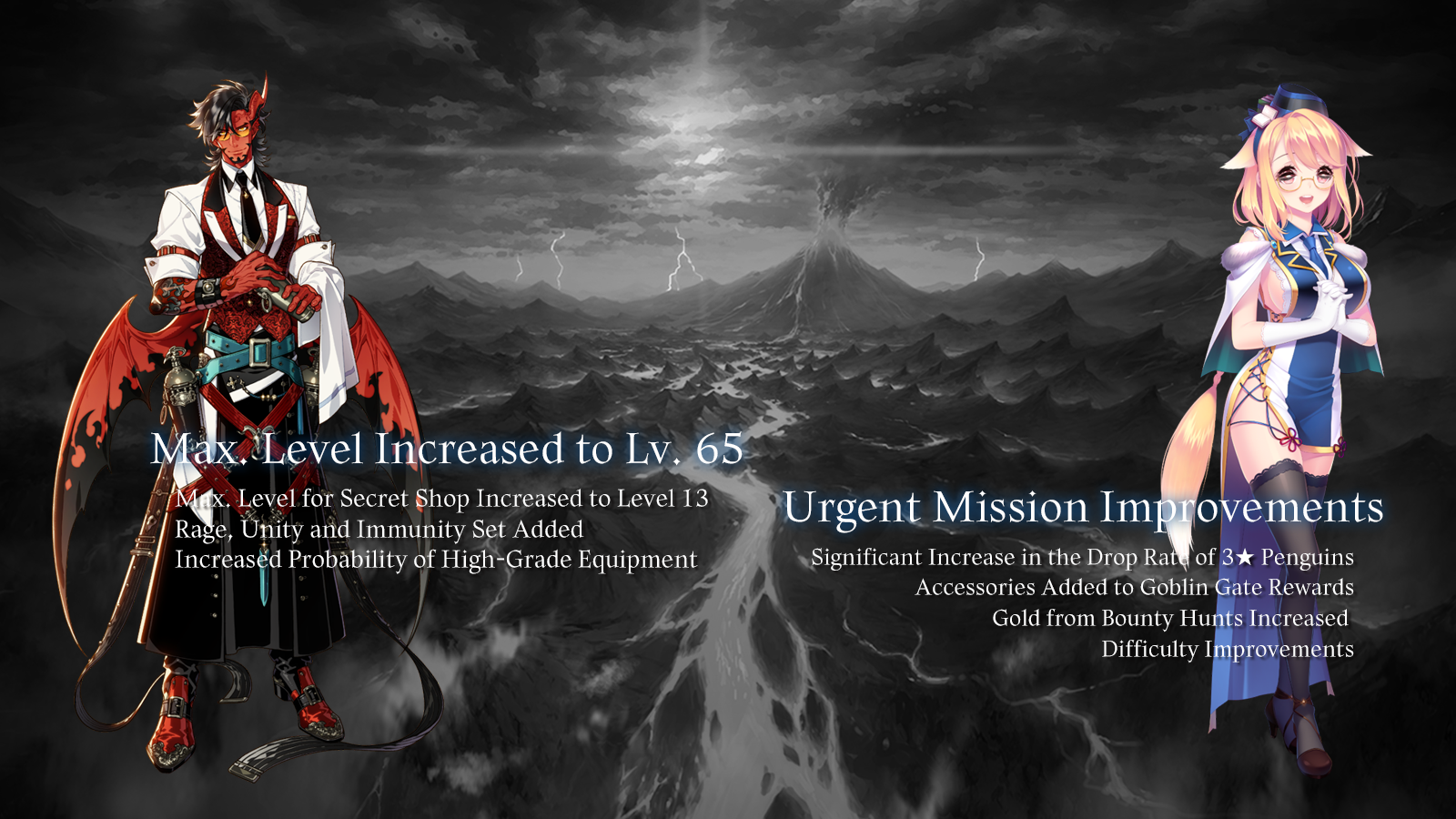 Now, we would like to share some of the improvements that will be made with the June 13th update.
With the release of Episode 2, we will also increase the maximum level for accounts to level 65. In addition, the maximum level of the secret store will be increased as well. We will be introducing new equipment sets, Rage, Immunity and Unity as well as increasing the drop rate for high-level equipment. 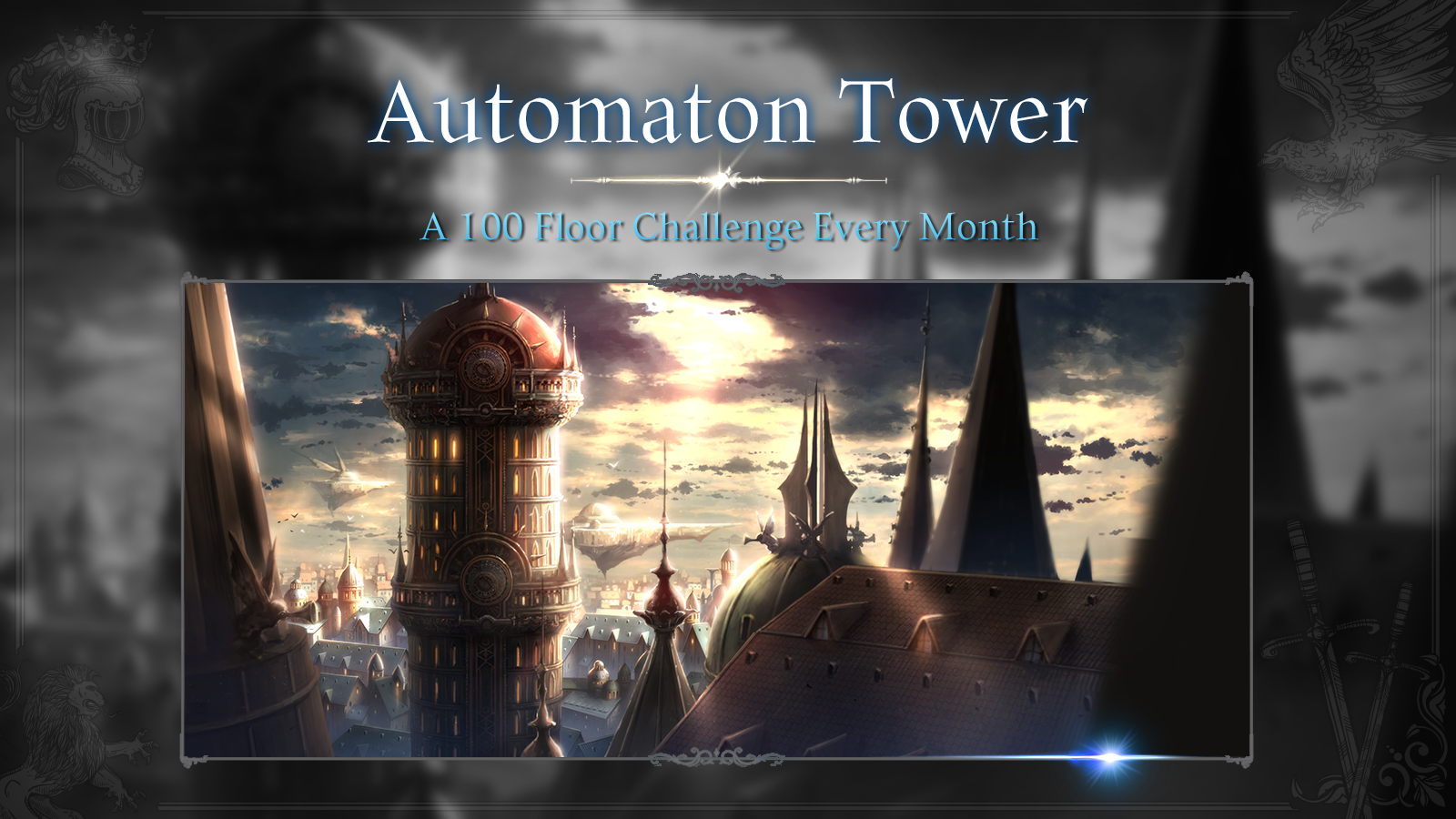 Next, I would like to give you more details about the June 27 update. In this update, we will drastically reduce the difficulty of obtaining and enhancing equipment including accessories. In the late January update, we made adjustments so that it was possible for players to obtain accessories from Hunt. However, we found that there is still a shortage in the amount of accessories when compared to the number of heroes, making it difficult for players to fully equip all of their heroes. We have to plans to address this issue so that players will be able to more consistently equip their heroes with the equipment necessary in order to increase their strength. 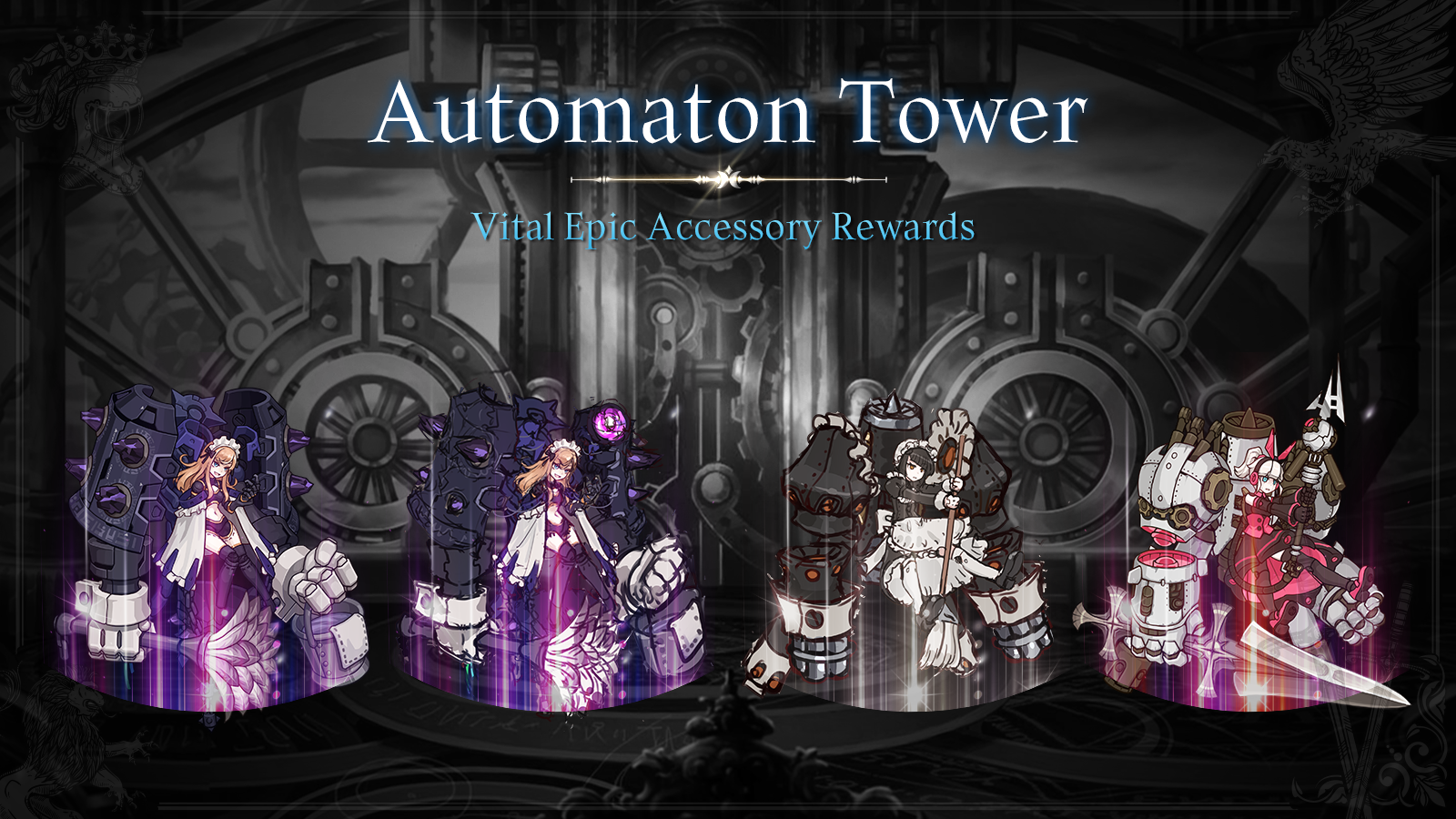 First, we have the Automaton Tower. This tower has 100 floors and player’s progress will reset on the first day of every month. Even though the update will be on the 27th of June, players will only be able to enter it on the 1st of July. In this tower, players will be able to obtain various levels of epic accessories and accessory charms. As the sets and stats for the accessories that can be obtained from the Automaton Tower are good, we believe that it will be very helpful for our Heirs who want to increase their hero’s strength. Players will also be able to receive MolaGora and Galaxy Bookmarks as rewards.

The enemies players will meet in the Automaton Tower and the rewards that can be acquired will change every month. We will also prepare a hard difficulty level if there are a lot of heirs who manage to reach the 100th floor. The second big plan that we have is the completion of the Sanctuary. First, we will open the Alchemist's Steeple that our heirs have not yet been able to access. In the Alchemist's Steeple, players will be able to craft charms and transform catalysts into different catalysts. Players will also be able to transform low-level materials obtained from Hunt into high-level materials. 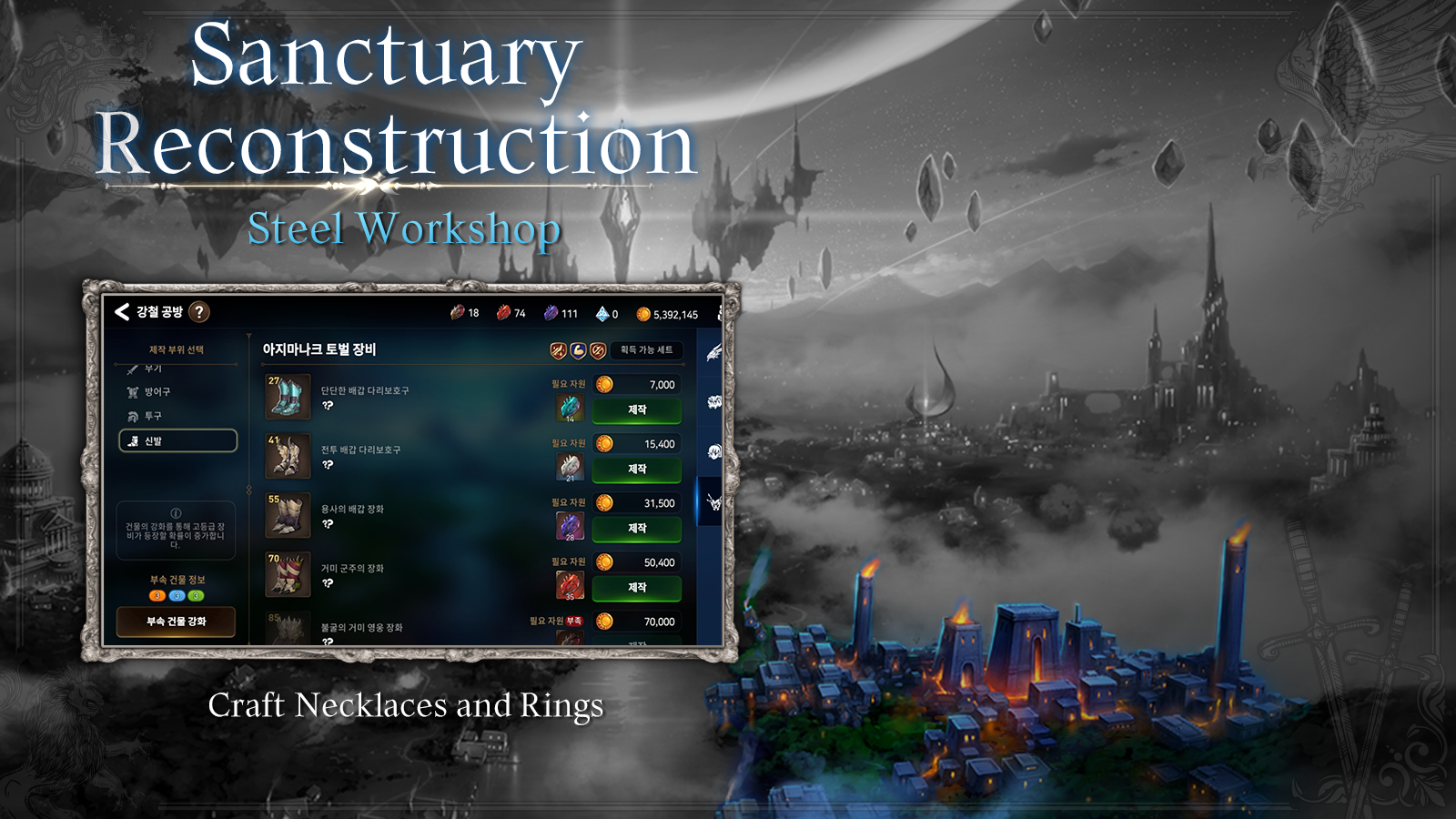 Additionally, players will be able to craft accessories at the Steel Workshop. Please note that the gold cost and amount of material required to craft accessories will be 30% more compared to other equipment.
We hope that by having more to do in the Sanctuary, players may enjoy nurturing and strengthening their heroes. Of course we understand that changes to the supply equipment will not be enough to satisfy our players, which is why we will also rebalance Heroes with the June 27th update. We know that a lot of our Heirs have expressed concern regarding the uniformity of the current team compositions. Through the rebalancing that will be carried out in June, we, the developers’ team, are excited to see original and diverse team formations. We plan to carry out rebalancing patches regularly in the future as well.

We are also preparing many things for the July update. We will have a regular season for Guild War. Also, all bosses will appear in Hell Difficulty of Raid Labyrinth – Azmakali.

Once again, we would like to thank all the Heirs that came to the Epic Seven Festa for all the love and support that they have shown us.