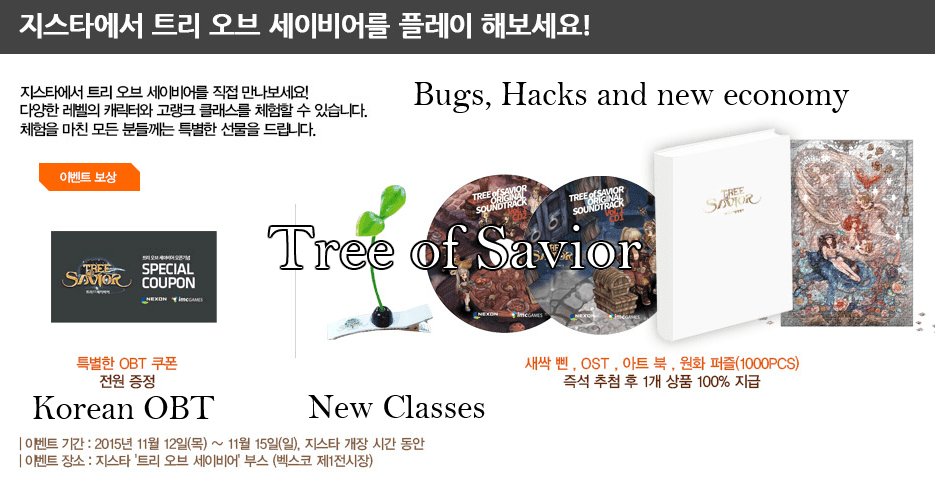 On the picture above you can see gifts for people who visit G-Star 2015. Maybe IMC Games announce Korean OBT date.

Hacks.
Few people decide to check how this game vulnerable to hackers. Guess what happened?
And other hacks worked. One of the hackers contacted IMC Games and with latest maintenance they're not allowing modify client files anymore.
If you got that error - "The game has shut down because of broken IPF files" redownload game.

Bugs. Friend list still bugged, FPS problems that depend on hardware, some skills not work and many more bugs.
https://forum.treeofsavior.com/t/someone-made-2-147-483-648-silver-by-warping/

New classes have been added in game files.  https://www.reddit.com/r/treeofsavior/comments/3np6vl/new_classes_ranks_added_in_korean_patch/

Rank 11 can be placeholder or just hidden classes. Centurion class been removed from the game until we get Raid or GvG content.

After yesterday maintenance IMC Games implemented new economy that caused massive uproar on the Tree of Savior related forums. Today they reverted it.

"As some of you may already know, the prices that were applied yesterday were from KCBT version.
Unlike KCBT version which has been running for some period of time, ICBT version has been out there for only one week. The prices were changed in KCBT to work as a means to control inflation, but we've decided that its not the right time to change certain prices in ICBT version.
It is likely that we would apply the prices in KCBT version to ICBT in the future as the economy also changes in ICBT, but we want to first receive your detailed feedback regarding the economy in the game before we decide on changing any prices or rates in the game"

So, what is the new economy?
Item prices (When selling to NPC) reduced by 50% - 90%.
Teleportation and repair now cost a lot more and it better if you never repair on low levels and just sell gears to npc.

New Economy fine if you have 200+ level character with maxed attributes and maxed gears.
Tags:
ShareTweet